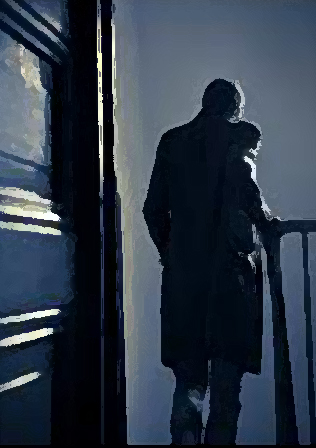 The drug raid, the cluster fuck, the cloud of coke, the shooting, the bravery and the cowardice, the loyalty and the betrayal.  Was Detective Sgt Boyd pumped up by all of this?  Of course.  However extraordinary it all was, in a strange way, it still seemed normal.  The good guys, for once, beating the bad guys.  Simple.

So, how does Boyd find himself in the late-night street, wounded, coked and naked?   And, literally, fucked.

There was a chase after the raid, exchanging fire: the tracker dog - crazy with coke - leading Boyd deeper and deeper into the mediaeval catacombs under the city.  The tunnels tight and twisting, no way back, the horror of being trapped: to emerge, like something new-born and find himself armed, wounded and dangerous in his room.  Except, he's not the one in danger.

Gun fight, China White,
Catacombs black as night
In his room, drawn by fate -
Flee, flee!  It's not too late.